Orange Is The New Black Ending After Season Seven

It’s time to say goodbye to Alex, Piper and the women from Litchfield Penitentiary, with season seven of Orange Is The New Black set to be the last. OITNB made TV history when it debuted in 2013, with a same-sex relationship at the core of the show and a diverse cast highlighting the plight of minority women both inside and outside of the American penitentiary system. The show became one of Netflix’s most watched original series and was nominated for 16 Emmys, winning four, w 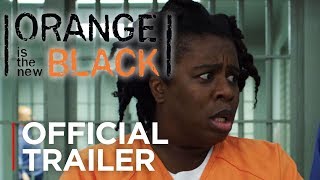 Watch The Trailer For Orange Is The New Black Season Six

Our favorite inmates are back but they’re not at Lichfield Penitentiary anymore. Season five of Orange Is The New Black ended with a three day riot. 10 inmates were hiding in Frieda’s bunker and the rest heading were heading to their new maximum security homes. Prison officers Piscatella and Humphrey had been killed, with Daya turning herself in for shooting Humphrey. The season six trailer is thin on plot points, but Lolly’s back, Alex isn’t and the girls seem to be facing t

Congratulations to OITNB actress Samira Wiley and writer Lauren Morelli, who married in Palm Springs on Saturday afternoon. According to Martha Stewart Weddings, the brides wore white, Samira’s Baptist pastor parents officiated the outdoor ceremony and the girls walked up the aisle to Montell Jordan's "This Is How We Do It.” But this happy ending did not come easily for Morelli and she detailed her struggles with coming out in a deeply moving 2014 blog for mic.com. Morelli ha